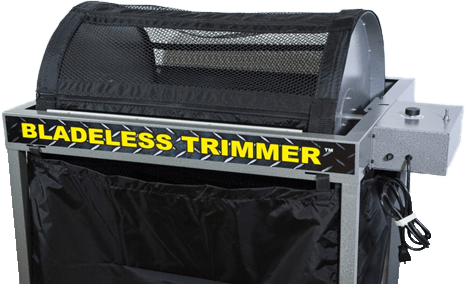 With the ever growing list of states and countries that allow for the use of medical or recreation marijuana, a new industry appears to be on the horizon. With this new industry comes the need for innovative machinery and tools to aid in the cultivation, processing, and packaging of the product.

One example of a new tool was brought to us by a distributor in Northern California. A machine fabricator was asked to produce a machine that could aid in the trimming of unwanted leaves from “buds”, the part of the cannabis plant that’s sold to consumers. Traditionally, trimming leaves was done by hand, which is a very tedious and time consuming process consuming a lot of labor hours. The direction this particular OEM decided to take was to design a machine that did not use any blades at all, but consisted of a horizontally suspended drum that is formed out of a “net like” fabric material. The drum is coupled to a small gear motor that is driven by an American Control Electronics MGB Series regenerative smart control. When the buds are to be trimmed, the product is placed into the drum. The drum is then rotated, which causes the product to tumble within the drum. This tumbling effect causes unwanted leaves to be sheared off. The operator of the machine can also reverse the direction in which the drum rotates to further enhance the sheering action. Trimmed leaves fall through the mesh and saved for further processing by a cannabis oil extraction press. A proposed enhancement to the system is to have the MGB smart drive run a routine in which it runs the motor in forward for a predetermined amount of time, then it automatically reversers the motor with no user interaction. After an x amount of forward/reverse cycles, the MGB control would automatically stop the motor and alert the operator that is was ready to process another batch.

As a value added benefit, we also created a kit which includes the MGB control, speed potentiometer, reversing switch and fuse holder all wired together and really to install.

Click here to learn more about how American Control Electronics engineers can help you.