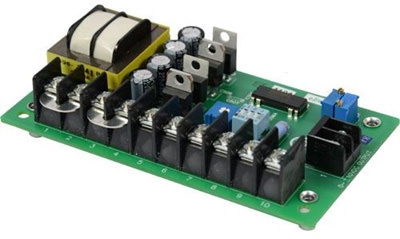 ISO202-1 Isolation Card For Use With Any ACE Motor Control

How To Vary Motor Speed With A Potentiometer

How To Vary Motor Speed With An Analog Signal

No. Connecting the PLC and motor control in the image above would actually cause damage to one, if not both, of the devices. Why? The drives are at different potentials. The PLC may be outputting a 0-10 VDC range, but relative to earth ground, that range might be between 14 and 24 volts. The motor control on the other hand is between 105 and 115 volts. So while the drive is expecting a 0-10 VDC like the one put out by the PLC, if you were to connect the 105 VDC potential of the motor control to the 14 VDC potential of the PLC, there would be a large rush of current which would damage components in possibly both devices.

So what’s the solution? Isolation!

Isolation in an industrial control is a method of connecting two electrical devices of different electrical potentials without changing the electrical potential of either device, possibly preventing damage to one of those devices in the process. One method of isolation uses diodes with a transformer, (simplified in the illustration below), but is more typically done using an isolated op-amp.